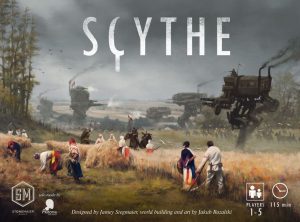 So I have was recently harassed into painting my Scythe Collection. I love this game, and I agree that painting anything makes it better, but I really didn’t want to put the work into these game pieces. One day i googles “Scythe Painted” out of curiosity, and I was pretty much instantly inspired seeing the characters were quite simple colour schemes, and due to the work of others online, it was almost a paint by numbers like situation.

One day I may invest in an actual light box to take nice pictures of things, but maybe i’ll wait till my painting ability is not complete garbage! On to the ART!!! 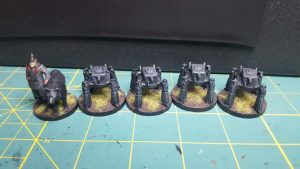 This was the first guy I painted. It was actually quite fast as he has a very easy animal and simple colours himself. 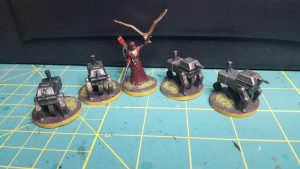 Here is where the annoyances started. This miniature was a terrible cast. The entire bow was a solid piece with no gap between the bowstring and the bow wood. I tried to remove the plastic but all I accomplished was putting a model knife into my thumb. It’s ok though, because I managed to glue the bow back together almost perfectly, and thumbs heal pretty quick. 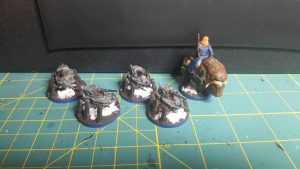 I really liked painting this viking and his musk ox. This was also the first time I worked with modeling snow and It was kinda cool to see how it worked. I also think they have some of the goofiest mechs. 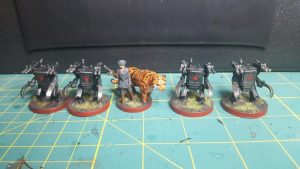 The reason I did not want to paint this set. The Tiger…. Oh Changa, how I hate you. I even looked directly as a picture of a tiger, and I tried my best to make the tiger stripes, but I am still not there yet as a painter. I know with bigger models, people usually make tracer lines, or have there nice $50 super paintbrushes (or are just talented) but I am not quite there yet. I did what I could. I don’t think it looks terrible, but it’s definitely not good. 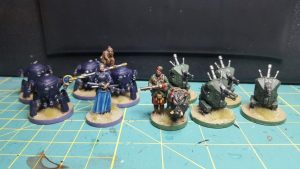 Group shot for the expansion. The Invaders from afar! Really cool expansion for Sycthe, and the best quality out of all the models. I really liked painting them, and there isn’t much else to say about them. The Asian mechs are cool, and I wish I spent more time on them. 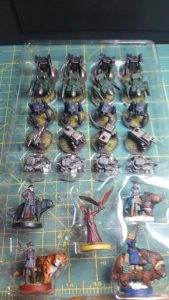